664 Collins Street tops off on new city block for Melbourne 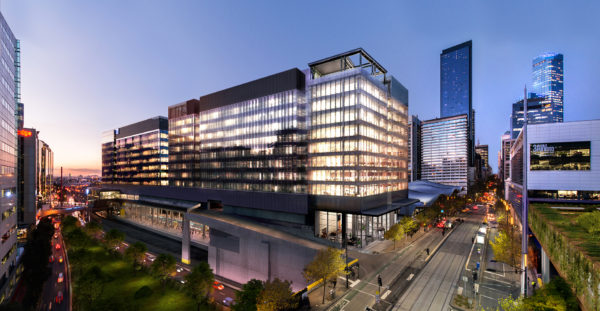 Grimshaw Architects has celebrated the topping off of 664 Collins Street, the practice’s second commercial building in Melbourne. Conceived as part of the Southern Cross Station master plan, the new workplace is built 16 metres in the air upon a vast concrete and steel slab, erected in place of the station roof to create a new city block. It shares this with its sister site to the north, 699 Bourke Street, the first of the two buildings designed by Grimshaw for Mirvac and completed in 2015 for AGL Energy.

Together the site spans 200 metres along the rail corridor, joining the Bourke and Collins Street bridge extensions and reaching more than 64 metres above the tracks.

Grimshaw partner Neil Stonell says, “664 Collins Street is the final piece of the Southern Cross Station master plan, completing over 15 years of design and construction with the dual aim of providing contemporary workplace while helping to stitch together the two halves of the city fabric across the chasm of the rail corridor.”

Within this new city block a much-needed pedestrian link has been created for the precinct with open-air views of the city skyline above the silver undulations of the station roof.

Grimshaw associate principal, Damon Van Horne says, “Constructing over live rail poses significant challenges due to limited access and complex connections to mains services. The existing slab allowed for much of the construction to proceed without interruption, but key elements, such as the vehicle access ramp from the street, required challenging over-rail craning in the dead of night.”

Mirvac’s general manager of Commercial Development, Simon Healy, says, “Mirvac is proud to reach this significant milestone at 664 Collins. The development showcases the strength of Mirvac’s integrated model, managing the end-to-end journey from initial conception and planning to construction, with the delivery of the building on schedule for 2018.

Since Grimshaw’s British Pavilion for Expo 92 in Seville, Spain, sustainability has been a core value for the practice and so the design of 664 Collins Street seeks to balance the tight commercial demands with occupant amenity. Rebates within the elevations increase daylight and views, while the overall dimensions of the floor plates maximise natural light into the heart of the building. The internal environment is an integral point to score in ESD rating systems, for which 664 Collins is targeting a five star Green Star Design and five star NABERS Energy rating.

The form of 664 Collins is a simple and efficient box, covered by vertical fins which act as solar shading and blur the surface of the building. The hard-working infrastructural context of the site is referenced in the muted tones and material selections of glass and steel. By contrast the lobby finishes have been selected for their timeless qualities, with basalt stone floor and walls of travertine and American walnut. As a place-making element, a large media display wall in the lobby will entice visitors and staff with curated imagery. At roof level, an event space and outdoor terrace provide sweeping views of the city skyline to Port Phillip Bay.

Grimshaw celebrated with a rooftop ceremony hosted on 22 May by Mirvac and major tenants, Pitcher Partners and ExxonMobil.

“The Topping Off ceremony today acknowledges a successful collaboration between partners, tenants and stakeholders in the ongoing delivery of 664 Collins,” Healy says, “and I would like to take this opportunity to thank them for being involved in creating this unique building.”

The completion of 664 Collins Street is expected by early 2018.