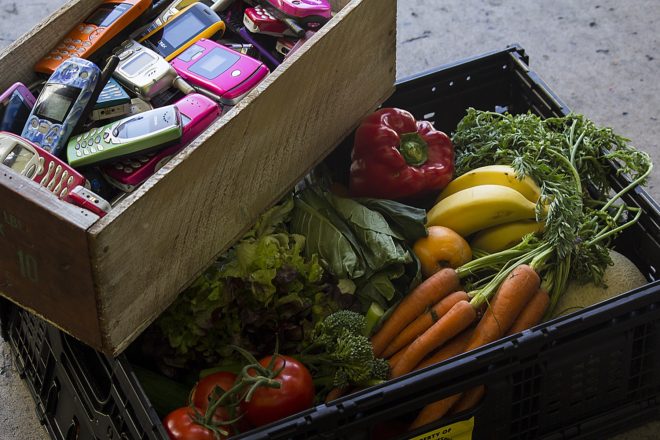 Australians have rallied together for a worthy cause, decluttering their homes and donating 60,000 old phones for recycling, which will allow OzHarvest to deliver the equivalent amount of meals to people in need.

MobileMuster and OzHarvest’s successful summer initiative Mobile For A Meal ran over the summer and will help deliver 60,000 meals to vulnerable Australians. As part of the initiative, MobileMuster took every mobile phone that was recycled and donated the cost of a meal to OzHarvest, helping them to feed people in need across the country.

“Recycling efforts have not only helped OzHarvest but also helped the mobile phone industry to play their role in product stewardship and ensure that products that have reached the end of their life are recycled in a safe, secure and ethical way,” says Stuart MacIntyre, Chair of the Australian Mobile Telecommunications Association (AMTA), which manages the MobileMuster program.

“I am overjoyed that so many people have put their old mobile phones to good use,” says Ronni Kahn, CEO of OzHarvest. “Through this great partnership, old technology has been saved from landfill and turned into a healthy, hot meal for someone who really needs it.”

Although e-waste and food waste aren’t typically related, the initiative tackles these two growing issues in Australia. Every year, Australians waste $10 billion worth of food, and there are over 25 million old mobiles sitting around in Australian homes waiting to be recycled. The initiative brings together these problems by donating the value of a meal to OzHarvest for every phone that was recycled during the campaign period.

“Mobile For A Meal has been a huge success for the MobileMuster program,” says Spyro Kalos, the recycling manager at MobileMuster. “We have seen a 17 percent increase in the number of phones we usually collect over those summer months, which means more Australians are recycling.”

“The initiative has been successful threefold: encouraging people to recycle, keeping old mobile phones out of landfill and contributing to the important work that OzHarvest is doing,” he concluded.

Although the initiative has finished, Australians can still recycle their old phones and accessories at selected electronics stores (with a MobileMuster collection box) or by requesting a MobileMuster satchel.