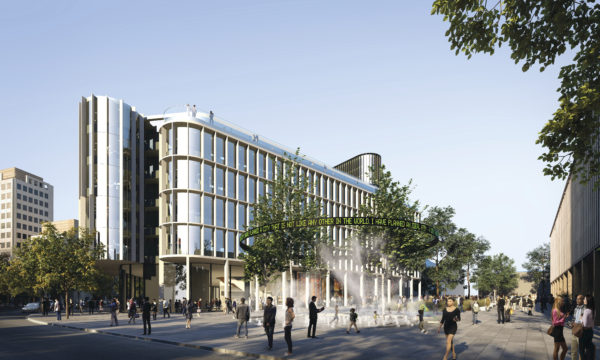 Canberra’s Constitution Place is set for a new look, with a $300 million plan officially launched by the Capital Property Group. The development will become a new civic heart for the nation’s capital and will transform the inner city with two new commercial buildings and a fine grain network of laneways.

The project will be the first private sector development on the Vernon Circle side of London Circuit and will be designed by architects Bates Smart. Its inherent qualities have been drawn from Canberra’s masterplan conceived by Walter Burley Griffin and Marion Mahony Griffin in 1912.

The ACT Government offices is expressed as three volumes with façade strategies that respond to their solar orientation and context, while the commercial building is two stacked volumes.

The design for Constitution Place was informed by the Griffins’ original plan for Canberra. The architectural forms are sculpted to reinforce their geometry and intention, and to create a dynamic backdrop to the new public spaces. Bates Smart director Philip Vivian says, “We have engaged geometry and axes in a new manner to create urban spaces and built forms unique to Canberra, using enduring materials to create a lasting legacy.”

“Our interest is not to create monumental buildings, but rather to contribute to the public life of Canberra. Canberra is a national treasure for the people of Australia. It is also a statement of ideals addressing the political, cultural and community wellbeing of all Australians.  As the Griffins put it, ‘a great democratic city’ could only be achieved by securing a high quality of life for its citizens.”

Construction is set to commence mid-2017, with completion scheduled for mid-2020.