How will commercial buildings adapt to a changing climate? 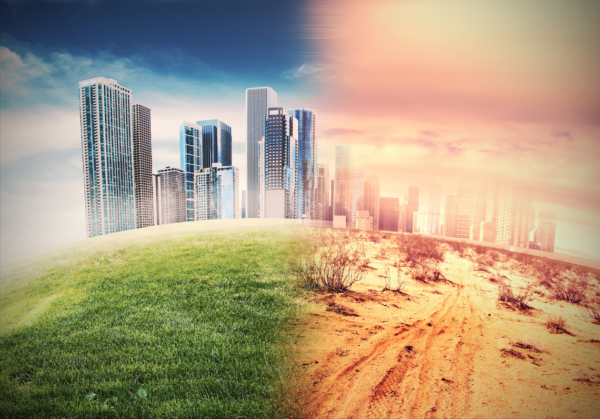 With commercial buildings typically having a useful lifespan of at least 50 years, today’s new towers will need to accommodate adaptation to a variety of impacts of climate change. Some of the most significant implications of climate change for building owners, however, may actually be related to energy efficiency and greenhouse gas emissions reduction in other sectors. David McEwen reports.

While 77 percent of Australians in The Climate Institute’s recent ‘Climate of the Nation 2016: Australian attitudes on climate change‘ survey agreed that the climate is changing, most of the physical impacts are still subtle, but will become more obvious over the next few decades.

The first physical change is temperature, with averages gradually getting warmer. For buildings, this means greater thermal load, with the most significant impact expected to be longer runs of very hot days, putting increased stress on cooling and ventilation systems and encouraging greater efficiency through both active and passive design (and promoting changes in occupant expectations and behaviours). Generally milder winters, on the other hand, may reduce heating energy requirements.

Sea level rise (SLR) is a growing threat for coastal properties, with the main challenge over the life of most buildings likely to be the magnifying effect that small amounts of SLR have on storm surges associated with big storms. This accelerates coastal erosion and destroys infrastructure in its path.

A less obvious problem is the impact of SLR on stormwater systems, particularly when drains are close to existing sea levels and may be exposed to backflow during very high tide events. Some buildings may need pumping systems added as outflows need to be raised, something that is already occurring in particularly exposed areas such as Miami, Florida.

Related to this is the expectation of increasing frequency and intensity of extreme weather events, including storms featuring very heavy precipitation, hail, wind and/or electrical storms. In this case, stormwater capacity and on-site detention becomes a key challenge, as does roof and façade integrity, lightning protection and the ability to defend the building perimeter and entrances to below ground areas from fluvial or flash flooding.

In some areas, bushfire hazards may become more pronounced. For most commercial buildings the main risk will be air filtration to ensure occupant comfort on smoke haze days.

Energy efficiency initiatives are not limited to the building sector and a key area that may drive changes in commercial building design is the emergence of autonomous electric vehicles (a technology that promises a host of potential efficiency and other benefits).

No longer drivers, car users will want to be disgorged in the comfort of a porte- cochère that is protected from the blazing sun or driving rain. The car can then park itself (though the incidence of using a privately owned vehicle for commuting purposes is likely to decline with the advent of relatively inexpensive driverless cabs). Self-parking is likely to become a common feature even for the cars of traditionalists who prefer to drive manually.

Because an autonomous car is much better at negotiating tight parking spots than a human driver and has the added benefit of not needing to open its doors to let a driver out, parking facilities for AVs (automated vehicles) will be a lot denser, reducing the basement or above ground space that is typically used for parking in commercial buildings. Indeed, there will be little point devoting prime CBD real estate to parking when cars can garage themselves in cheap CBD fringe locations (equipped with robotic charging points) and be summoned on demand.

David McEwen is a director at Adaptive Capability, providing strategic advice to help businesses create and preserve value in the face of climate change. He is also the author of the new book, Navigating the Adaptive Economy. Visit www.adaptiveeconomybook.com for more information.