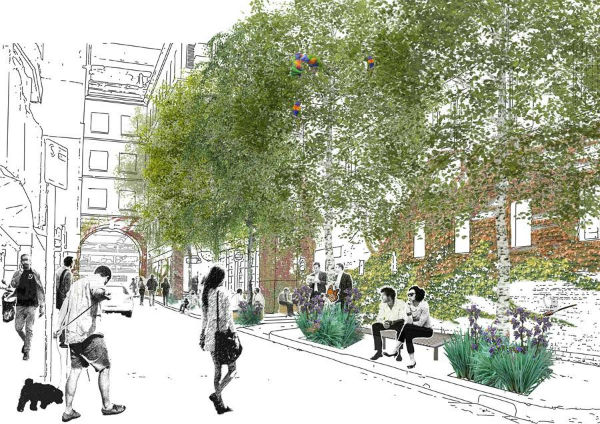 Draft designs showing how four Melbourne CBD laneways could be transformed as part of the Green Your Laneway pilot program have been released.

The City of Melbourne is investing $1.3 million to convert Meyers Place, Katherine Place, Guildford Lane and Coromandel Place into green and sustainable places.

“Melbourne’s laneways are internationally renowned for their quirky and eclectic culture and feel,” Doyle says.

”We can add another layer to their attraction by enhancing the sustainability of our laneways and making them ‘green’ and therefore more efficient at cooling the city, intercepting and cleaning stormwater and improving air quality and ambience.

“There are more than 200 lanes in our central city but only a small number of these feature greenery.”

The City of Melbourne has used a world-first mapping technique to identify which laneways could go green based on the amount of sunlight they receive, their exposure to wind and their physical and functional characteristics.

The laneways were selected based on more than 800 public nominations and expert advice from a panel of engineers, sustainability professionals, place-makers and landscape architects. The City of Melbourne has worked with the owners, residents and workers to consider which type of greening would suit each laneway.

“A coalition of businesses and building owners in one of Melbourne’s oldest laneways, Meyers Place, would like to create lush greening around their cocktail bars and restaurants,” Doyle says.

“Guildford Lane’s residential community would like to create a leafy refuge from the city, with climbing plants and pots to complement the laneway’s beautiful brick warehouses. They’re also considering a community garden for residents and a series of innovative ‘drain-gardens’ to capture rainwater and reduce flooding.

“The residents and business owners in Coromandel Place want a laneway that invites the passer-by to come in and explore, with a range of seats, planter boxes, green walls and artistic installations.

“Katherine Place near Southern Cross Station could be transformed into a tree-lined miniature boulevard with an ivy-covered archway.”

Sample greening concepts and the draft designs will be on display in ‘pop-up’ form in Meyers Place from November 3-14. On Saturday November 12 from 2pm, Meyers Place will also feature gardening workshops, delicious food and live music. Following the community consultation process, the City of Melbourne will finalise the final laneway designs in early 2017.