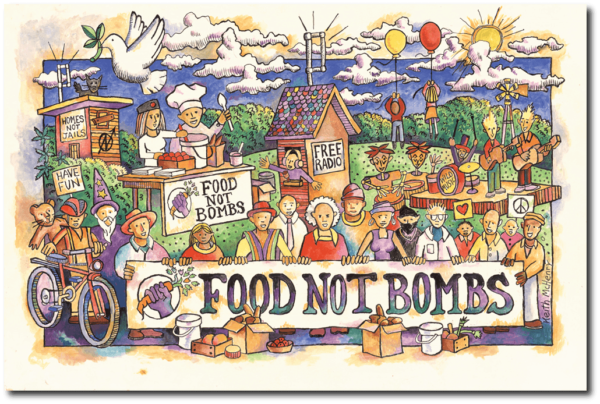 The global community-based feeding movement Food Not Bombs is garnering attention in Australian cities and is growing its initiative. Founded in the United States, the organisation recovers food that would have been discarded and shares it as a way of protesting war and poverty, and has now made its way across the seas.

In Brisbane, a small group has taken up the Food Noy Bombs fight. Participating in what is commonly known as ‘dumpster diving’, the group takes food discarded by supermarkets and turns it into home-cooked meals for the hungry, the disenfranchised, the isolated and the lonely.

Meeting every Friday in a park in Brisbane’s West End, the group usually visit just one supermarket bin and there they find an abundance of perfectly edible and useable fresh food, which they turn into vegan and vegetarian meals to feed 40 people.

Among their weekly hauls, they discover bags fruits and vegetables such as carrots, zucchinis, bananas, potatoes and onions, loaves of bread, packages of doughnuts, and unopened cans of soft drink. It adds up to kilograms upon kilograms of food that would otherwise rot away in landfill. The useable food is washed, the damaged food is turned into sauces, and the too-far-gone food is composted.

Once the food has been collected, the Food Not Bombs crew takes it to a community kitchen where they collaboratively prepare and cook homely meals, and invite the community to share it with them at the People’s Park.

Andrew Paine, one of the participants of the movement, says, “Food Not Bombs is a weekly street kitchen where we share food together in a public place and invite others to eat with us. [It’s] such a precious occasion.”

The food is, of course, an important part of the Food Not Bombs movement. But while providing nourishment and salvaging food, it also represents so much more than that.

Perhaps just as important as a warm, comforting meal is the sense of community and the relationships that are forged every week in this unsuspecting park. Firm friendships, warm smiles and compassionate support – Food Not Bombs offers these things to those isolated from the community and who struggle to find it elsewhere.

For those with disabilities, mental illnesses and social disorders, Food Not Bombs provides a platform for social interaction and acceptance. Paine says they wanted to create an environment where participants could connect every week and meet new people.

“One of the great things about Food Not Bombs is its horizontal structure; no one is in charge,” he says. “You don’t need to book, it’s completely free and there’s no weekly commitment needed to join us. Come once, or come every week.”

The Brisbane Food Not Bombs group is just one of the plethora that now thrive across Australia, bringing communities together, helping the hungry and combatting the unnecessary food wastage that is rife throughout our culture. If one small group can salvage enough fresh food from one supermarket bin to feed 40 people on one day of the week – consider how much each supermarket in each city must discard every day, all across our country. Surely, in a world where homelessness and hunger is increasing among our disenfranchised, there is something very wrong with this picture.