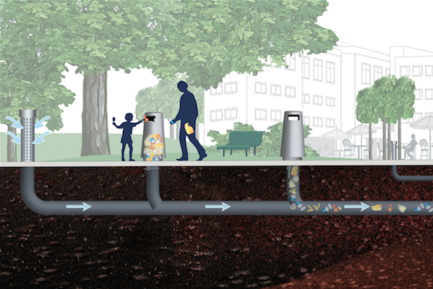 Plans have been unveiled to implement Australia’s first high-tech, automated waste collection system for a city district in Maroochydore on the Sunshine Coast in Queensland.

Rather than using wheelie bins, the system allows waste to be transported from commercial buildings and apartments at up to 70km/h through a 6.5km system of underground vacuum pipes located beneath the city centre.

Each building in the region will include at least three waste inlets – for organic, recyclable and general waste. Rubbish dropped into each inlet will be stored in a sealed compartment below ground until the vacuum pump is activated at the central waste facility, usually twice each day.

The vacuum system will then consecutively collect each type of waste, sucking it through a system of underground pipes to the central facility, where they will be stored in sealed compactors for collection by council’s contractor.

“The system means that city workers and residents will never have to walk past rows of wheelie bins or be woken early by noisy garbage trucks in the Maroochydore city centre. Common aspects of waste collection such as odours and vermin will be avoided, and the costs of daily street cleaning will be reduced.

“I’m very proud that the Sunshine Coast is leading the charge in Australia with this innovative waste collection solution and I’m sure other cities and major urban projects will soon be following in our footsteps.”

In the UK’s Brent Council, recycling levels were increased by 50 percent – twice that of the London average – following the installation of the Envac system. An increase in recycling rates can be attributed to making the separation of rubbish and recycling as simple as possible for the user.

The waste system will cost $12 million and will be installed in stages over the coming decade.