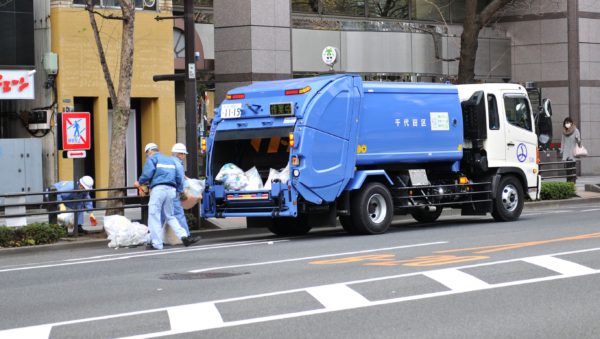 Taiwan is taking a stance on sustainability and setting an example when it comes to recycling and garbage collection. As popular design podcast 99% Invisible reports, the capital city Taipei has adopted an unique method of collection in an effort to reduce garbage production and foster a connection between its citizens and their waste.

Five nights a week, Taipei’s garbage trucks rumble along their routes, warbling their signature tunes of Beethoven’s ‘Für Elise’ and Bądarzewska-Baranowska’s ‘A maiden’s prayer’ into the evening air to signal their arrival. These melodies announce to the  streets that it’s time for city’s inhabitants to take their garbage out to the trucks and toss it in themselves. There’s no abandoning it kerbside or chucking it down a chute for others to deal with – in Taipei, everyone is responsible for their own waste and directly deals with it themselves.

Albeit a little chaotic at times, this current system is leagues ahead of the previous one. Before the musical trucks, Taipei residents would throw their rubbish into fetid, pest-ridden dumpsters that sat on street corners, spilling trash onto the city streets and festering in the tropical weather. The foul smell attracted rats and other vermin, blanketing the city in an air of squalor. In the 1980s, as Taiwan pushed for democratisation, the Environmental Protection Agency developed the new pick-up system to clean up the streets and push a more sustainable recycling and collection practice.

The Taipei of today is unrecognisable from the garbage-strewn streets of the 1980s, reports the podcast. Rubbish trucks come through regularly, stopping up to three times a day, five days a week, as the city’s residents gather their waste and wait on their designated corners for the trucks to rumble past.

The trucks only accept trash bags that are officially sanctioned by the government, which come in a distinct colour blue and with an official seal. The bags come in a variety of sizes, the most popular being 25 litres, which cost approximately $5 for a pack of 20. As recycling and composting are free services, this effectively creates a pay-as-you-waste model, incentivising citizens to practice more environmentally friendly methods.

The musical garbage trucks are tailed by recycling trucks, where workers help residents separate their recycling and compost into 13 distinct bins. Those who fail to sort their materials properly face up to $200 in penalty fines. Essentially, Taiwan’s waste system is powered by the people and enforced with strict penalties for failing to comply.

Compare this to Australia’s waste and recycling system. Rather than taking an active role and claiming responsibility for what we toss into landfill versus recycle, our current model strives to be invisible. Garbage trucks come usually while we are asleep or while we are at work, and once we toss it in a bin it is whisked away and vanishes from out lives – leaving us with no notion of its consequence. Most of us don’t even really understand what can and can’t be recycled – we pick a bin and toss it in, and don’t give it a second thought.

Perhaps if we had to accumulate our waste, to watch it pile up and slowly rot, to watch how much we waste without it magically disappearing (into the earth), we might stop and reconsider the extent of our consumerism and the need for so much waste. Perhaps if we had to set time aside to catch the garbage trucks, to sort it and heave it into the trucks ourselves, like in Taiwan, we might produce less waste, actively choose to understand recycling and take responsibility for everything that we throw away.

Taiwan seems to be an example of a broad-scale revolution in waste management that has successfully taken hold with its entire population.

99% Invisible’s podcast on Taiwan’s waste collection can be found here.